What Angus does for a living...

Sometime co-host of The Malt and Barley Revue Angus MacRaild is a professional seeker after rare whiskies. Here's a story about him and others from The Big Issue.
Posted by Tom Morton at 16:12 No comments:

At the Spirit of Speyside Festival, 2014

Splendid piece by Margaret Chrystal on the occasion of the gig at the Drouthy Cobbler, Elgin, as part of the 2014 Spirit of Speyside Festival. This was printed in the Highland News and other associated newspapers, including the John o'Groats Journal/Caithness Courier and the Lochaber News: http://www.johnogroat-journal.co.uk/Whats-On/Music/Tom-reveals-why-whisky-Scotland-01052014.htm

Whisky, songs, poems and very tall tales – plus three drams to taste – make up the The Malt And Barley Show from Radio Scotland presenter, writer, musician and whisky fan Tom Morton. As well as writing a abook about his travels around the whisky distilleries of Scotland in The Spirit Of Adventure, Tom wrote a thriller last year, A Whisky In Monsterville which came with its own tasting notes for recommended whiskies while reading each chapter. Below he talks about the show – which is coming to Elgin tonight (Thursday) as part of the Spirit Of Speyside Festival – the best malt he’s ever tasted and an elusive one he’d love to try...

1 What first inspired you to think of doing a show about whisky?
Tom: The Malt And Barley Revue as it now is came out of a show called Tom Morton’s Drinking For Scotland, which was more about the Caledonian relationship with alcohol, the joys and sorrows. I’d written a couple of books about malt whisky and I liked the idea of demystifying the whole connoisseurship thing, the mumbo jumbo. First place I ever combined the tasting with the songs and poems was at Belladrum. Whisky, music, a few laughs, some tall tales...it seemed to work!
2 Did it take you long to put together the songs/poems/stories that and do you keep adding and taking away or is it a fixed core of material?
Tom: Some of those songs are 20 years old, and some were written just a month or two ago. There is a core of stuff but it varies – there’s usually a new poem every few weeks. There’s enough stuff for two hours, easily, but I think an hour and three drams is about enough for most folk.
3 Whisky and the arts – literature and song, anyway – seem to be fairly natural bedfellows. Is it the spirit itself or the many myths and rituals around it that prove most inspirational for you and the show?
Tom: I think one constant theme in the show is how whisky represents Scotland, warts and all, good and bad, merry and maudlin. I do think there’s a real magic in the making and even the naming of whisky. Even calling a dram a "wee goldie". It’s conjuring gold from almost nothing but water, barley and flame.
4 I only know of one other whisky show, so does this mean the international stage is wide open to the potential of The Malt And Barley Revue?
Tom: I think it’s maybe a wee bit too enigmatic, ambivalent, maybe, otherwise it would be a natural for the whisky after-dinner scene. I’m openly critical of some of the nonsense that’s talked by so-called "brand ambassadors" and there is a lot of rip-off selling going on – ridiculously overpriced malts in obscene, fake packaging. I’ve always had a tendency to bite the hand that feeds...or offers free drink.

Tom's thriller came with dram suggestions for each chapter.
5 Your last book, A Whisky In Monsterville, came with its own tasting notes and recommended whiskies per chapter. Should we expect a vinyl version of The Malt and Barley Revue with its own cover-mounted dram sachets any time soon?
Tom: I looked seriously at offering the book for sale with a miniature of Monsterville malt, but the cost was prohibitive. The next book in the series is called A Whisky Priest, so we’ll see.
6 Is there any whisky you know of by repute only that you would love/dread to try?
Tom: The best whisky I’ve ever tasted is the legendary 1974 Gordon and Macphail bottling of Ardbeg. I once had it straight from a barrel and it was a transformative, truly spiritual experience. There is also the mysterious Royal Household, traditionally available only at the Rodel Hotel on Harris, and some say the best blend ever. I have written a fictional account of how that connection came about, but it’s with the royal family’s lawyers. I almost won a bottle on an auction last year, but alas...
7 If there is some kind of superbeing in the sky, would it think on balance that whisky was a good or a bad thing for mankind?
Tom: Whisky comes from the Gaelic uisge Beatha, the water of life. Distillation was invented as a medicinal technique and the early distillers in Europe were all from religious orders. God loves a dram. But in moderation And never if driving.
8 Here’s a desert island dilemma for someone like yourself who loves music and whisky. Your boat is sinking and you can swim to the shore of a particularly attractive-looking, but sadly remote and deserted tropical island ie it will take some time for your loved ones to locate and rescue you. You only have one hand free as you swim ashore, so do you take either: A Music – your favourite record/CD (there will be a player handily abandoned in a safe place with power source on the island) or B Whisky – your favourite tipple in a large bottle?
Tom: Fortunately I can sing, and have a reasonable memory for songs. Also, once empty, I could use the whisky bottle to send a message asking for help. Or a jukebox.
The Malt And Barley Show is at the Drouthy Cobbler, Elgin, today Thursday (May 1) at 8pm. For more details on the Spirit Of Speyside Festival, go to: www.spiritofspeyside.com
Posted by Tom Morton at 15:34 No comments:

Hi folks - sorry to say that I've had to cancel the Dundee and Falkirk gigs. More news soon.
Posted by Tom Morton at 08:17 No comments: 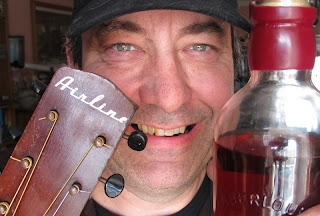 The Malt and Barley Revue hits the road again this week with gigs in Bo'Ness and Birnam, three brand new whiskies to taste, one or two new songs and a couple of guitars that fit my over-large hands rather better than the wee travel instrument I was using. Good as it was!

I'm looking forward to the show at the Bo'Ness Barony Theatre on Thursday 14 November - tickets still available. As In Birnam, (the Arts and Conference Centre) on Saturday 16 November, I'll be accompanied by Angus MacRaild from Whisky Online. Angus is a specialist in valuing old and rare whiskies, so if you have anything lying about in cupboard, cellar or loft, bring it along and he'll tell you how much it's worth!

He'll be guiding you through the delights of the three superb drams we have for your consumption. As usual, there will be songs, stories and a daft poems as well as the whisky. Oh, and signed copies of my new book A Whisky In Monsterville will be on sale - a rare chance to get hold of the print-and-paper version. Also the last few copies of Spirit of Adventure at a bargain price.

Tickets cost less than the price of three drams in a bar! Bargain!

Hope to see you there.
Posted by Tom Morton at 02:12 No comments:

Peebles, Oliver Reed's chair, and a breakfast fit for heroes...

The Peebles Malt and Barley Revue gig was another chance to visit the rather beautiful town in which I once purchased a breadboard for my wife and was bought a vintage wristwatch in return.


It happened like this: Ali Wilson, aka Drumslinger, mastermind and skinbasher behind various eminent east coast bands, was at the launch of A Whisky in Monsterville in Drumnadrochit, and offered to organise an M&BR in his native town. Which he proceeded to do, brilliantly.

Thanks to Audrey at the Courthouse, and all the staff there, especially Nicola and whoever made the excellent fish and chips. Also Fay at The Crown, whose breakfasts are deservedly famous. Very nice rooms, too. I do like a high-threadcount-sheet-situation! Great to meet the legendary Evan 'Hard As Nails' Balfour, former Airdrieonian, now singing with the terrific Taylor Brothers. I see you can still buy those 'Hard As Nails' stickers from an Airdrie fan website!
Peebles really is a lovely and very friendly place, full of splendid pubs, shops and restaurants, including the truly impressive Villeneuve Wines, run by Alister Rae and Kenny Vannan, with help from Gregg Parker. I liked it so much a bought a bottle of Clynelish 14. It's the only small(ish) town in Scotland with an internationally-acclaimed academy for chocolatiers and pastry chefs, as far as I know.
Great crowd at the gig, and thanks too to Ian Rankin for donating a signed bottle of the 'Rebus 20' Highland Park which was auctioned for an eye-watering (but still reasonable, as they're £2500 online) £1500. It will stay in Scotland, and was bought by a Fifer!

Next Malt and Barley Revue is at Ayr Gaiety Theatre on Saturday night. We'll be tasting Some highly unusual whiskies including, dare I say it, something from...let's just say outside of Scotland. And my special guest will be whisky valuer and auction specialst, Angus MacRaild from Whisky Online.

Two audience video clips from the Rutherglen show are up on on YouTube.
-The Amateur Pharmacist's Experimental Cocktail Club (poem)
-Whiskey in the Jar (final singalong!)
Posted by Tom Morton at 05:31 No comments:


The Malt and Barley Revue is an hour-long performance of songs, stories and poems by Tom Morton, all about Scotland and whisky. With detours to Ireland and Japan.

Funny, informative, laced with tragedy and tall tales, you may find yourself singing about steamboats or along with murderous highwayman, munching a very scratchy sweetmeat or wondering how on earth the Mother of Japanese Whisky came from Kirkintilloch.

You will certainly be sipping three of finest whiskies in the world, and wondering if it could possibly be true that one of them is English...


Hear some of the songs and dialogue here: 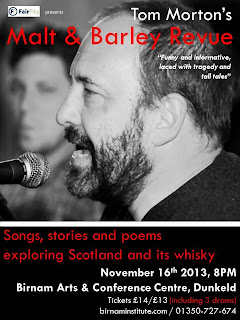 The Malt and Barley Revue: Whit?

What happens? Tom Morton, broadcaster, musician, talker, professional drinker, arrives with a guitar, three fantastic single malt whiskies (enough for everyone!) and an array of very funny, informative and poignant songs and poems. About whisky. About Scotland. About whisky and Scotland.
He is usually accompanied by a proper whisky expert, namely Angus MacRaild of Scotch Whisky Online, or Jon Beach, of Fiddlers in Drumnadrochit. They trade insults with Tom, and take the audience through a detailed tasting and appreciation of the whiskies provided.
Angus can also provide valuations of rare whiskies before or after the show.
"A brilliantly entertaining night, with top banter and great whiskies. Worth every penny."